Philippians 1:28: Not Frightened In Anything By Your Opponents

Philippians 1:28
[28] and not frightened in anything by your opponents. This is a clear sign to them of their destruction, but of your salvation, and that from God. (ESV)

We live in a country in which most of us can live out our faith with not a lot of opposition. Yes, there are times when we may get laughed at by a co-worker for our commitment to Christ. We may get excluded from certain events because of what we believe. And, there have been more occasions where some business owners' rights have been infringed because of their faith. But, in general, we are very free to practice our faith in Christ here in the United States.

Many parts of the world do not experience this kind of freedom. Opposition is expected the moment they confess the name of Christ publicly. The Apostle Paul was in a prison cell when he wrote Philippians. He would eventually be executed by the sword for his faith in Christ. Yet, he writes to the Philippian believers that they should not be frightened by their opponents. Their enemies will be destroyed. Believers will be saved. 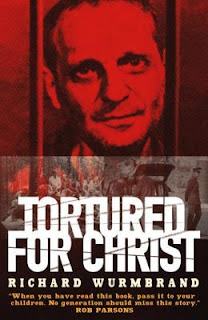 Richard Wurmbrand was a pastor in Communist Romania. He spent many years in prison for his faith and was brutally tortured for his faith. Listen to what he says of those who spent all of their efforts in opposing him and his efforts to share his faith in Christ:

“Persecution has always produced a better Christian—a witnessing Christian, a soul-winning Christian. Communist persecution has backfired and produced serious, dedicated Christians such as are rarely seen in free lands. These people cannot understand how anyone can be a Christian and not want to win every soul they meet.”
― Richard Wurmbrand, Tortured for Christ

You may be opposed for your faith. It is a blessing, not a curse. You bear the name of Christ. What an honor. Your opponents will not prevail. Christ will prevail, and you will be saved. Bless his name!

“I have found truly jubilant Christians only in the Bible, in the Underground Church and in prison.”
― Richard Wurmbrand, Tortured for Christ